On Wednesday 24 July, the Family Justice Young People’s Board (FJYPB) held its annual Voice of the Child conference in Leeds.

The event was completely child-led and focussed on the mental health and wellbeing of young people who are involved in family court proceedings.

Approximately 250 people attended the event, with representatives from across the family justice sector present.

The conference was interactive with the audience participating in presentations and games which the FJYPB members led. One of the highlights was the myths and facts game which got the audience thinking about mental health and debunked myths which young people often hear adults voicing.

There were several speakers who provided insight into their views on mental health and the family courts. President of the Family Division, Sir Andrew MacFarlane delivered a keynote speech and took questions from the audience. Speaking at the event he said:

“The FJYPB has been a game changer, that has made a real difference to the way that the family court system works.

“It’s good that the FJYPB is talking about mental health and are putting an emphasis on staying healthy.”

Parliamentary Under Secretary of State for Children and Families, Nadim Zahawi MP recorded a video which was played at the event. He commended the young people for choosing mental health as the theme for this year’s conference and said:

“I think it’s our job as national policy makers that children are at the heart of everything we do, and we listen to children so that what we do works for them.

“It is vitally important that children who experience the family courts are supported, especially where there may be mental health concerns and I’m delighted that this is the theme of the FJYPB conference.”

During the day, three brave FJYPB members took to the stage to share their experience of mental health, letting the audience know what it is like to be in their shoes.

Attendees were given the opportunity to take part in workshops led by children and young people. The following workshops took place during the day:

All FJYPB members had roles to fulfil at the event, including speaking about their experiences, leading on activities and getting on stage to deliver a rap which they had written in the RAP- Reducing Anxiety in People workshop.

One of the FJYPB members took on the role of event reporter and gave her view of the day:

“The conference was a unique opportunity for people of all different backgrounds to join in one room to support the same cause.

“I was grateful to witness the progress made by the FJYPB and Cafcass being celebrated, and I’m confident that the ‘Voice of the Child’ is a phrase which gains more meaning after each conference we hold.” 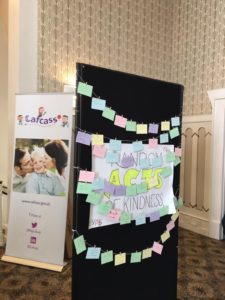